​
*This article was written by Dan Fent* 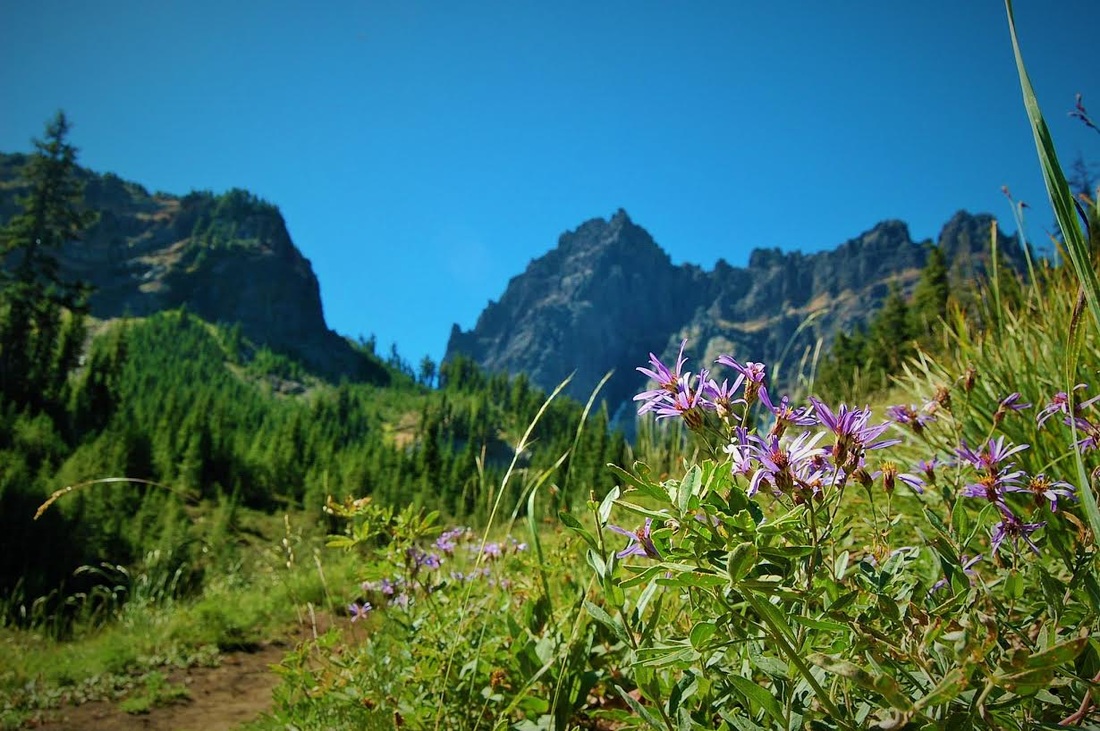 (View of Three Finger Jack from Canyon Creek Meadows)
August 21st, 2015 was a hot weekend and my friend Justin and I, along with my dog Kaya set out on the Pacific Crest Trail (PCT) near Santiam pass to complete a loop around Three Finger Jack.  We began by ascending steadily through burned forest as we slowly gained views of the Three Sisters and our main attraction, Jack to the north. After several dusty miles the burn begins to give way to a high mountain forest and glorious shade. The shade doesn’t last long though and soon we found ourselves at about 6,300 feet elevation, we are perched on the side of Jack himself, staring up at his rocky spires! Views stretch out far to the west with Maxwell Butte and Santiam Lake being the most visible points of prominence. 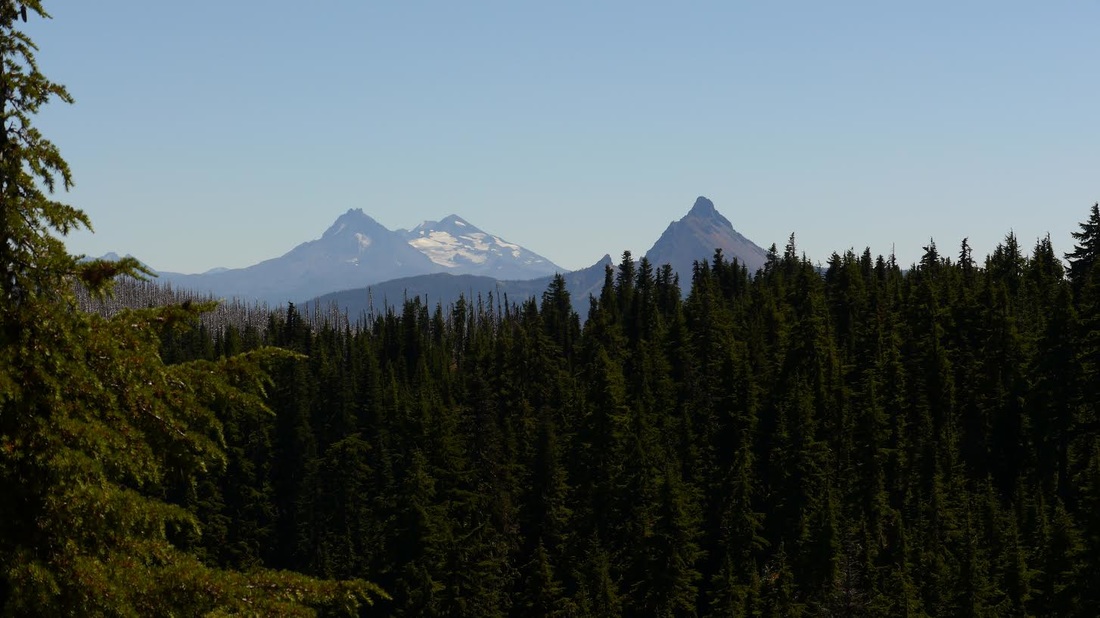 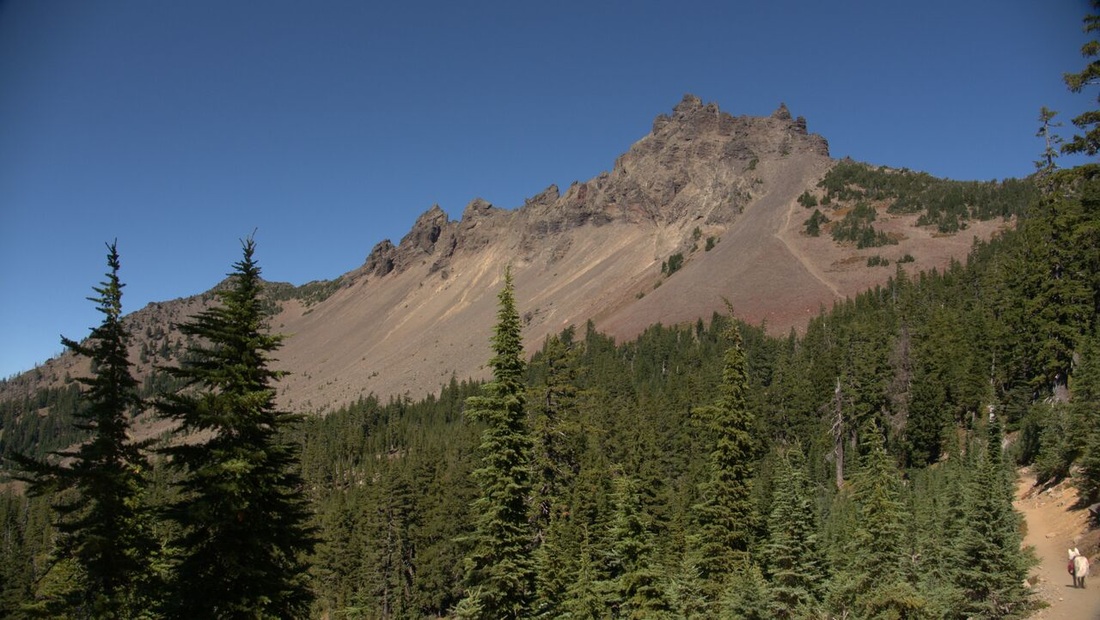 (Three Finger Jack's West side)
A short distance later we reached a pass between Jack and Porcupine Peak. The broad face of Jack is hulking to the south and Canyon Creek Meadows is now visible directly below. After a few switchbacks down the west side of the mountain we descended the ridge heading north and reached a cliff top viewpoint that overlooks Wasco Lake, our stopping point for the day. Much of the Wasco Lake area didn’t survive the B&B fire, but we were able to find good unburned campsites on the northern end of the lake and set up camp for the night. 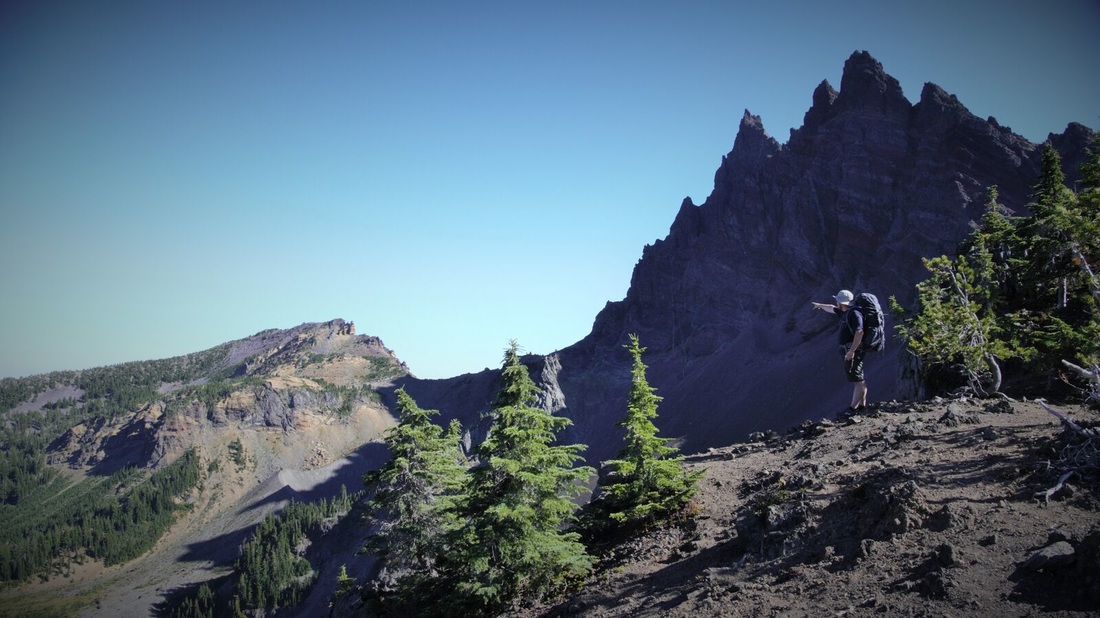 (Three Finger Jack's East side)
The next day we began heading south, about a half mile from the lake we again reached unburned forest. We followed the trail north past two trail junctions* before reaching Canyon Creek Meadows. In July the meadows here host spectacular wildflowers, which the mountain seems to jut straight out of. We missed the wildflowers this year, but the meadows are still awe inspiring nonetheless. After slowly meandering through them we began the ascent up the east ridge of Jack. Though there are no official trails up the ridge, many who visit the meadows take time to follow the boot path nearly 900’ to the top. And for good reason, the views here stretch from Mt. Jefferson in the north all the way to Broken Top in the south! 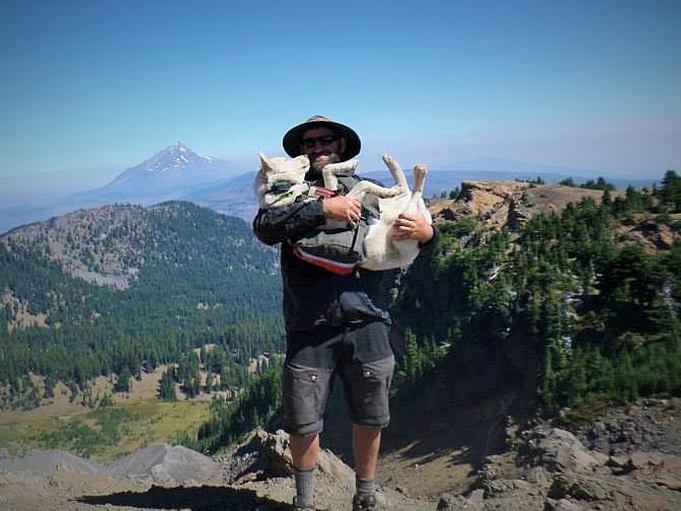 After leaving the ridge we were completely unassociated with any sort of trail. We hiked down, plunging through rocky scree while admiring Jack’s eroded cliffs. At the bottom we met the dried up bed of First Creek. We followed it east over rough burned landscape and wondered if others have stepped in the same spots. I try to imagine what it was like here before the area burned, but I won’t see anything but B&B ruins for the remainder of our route. After a mile of following the creek bed we rejoined the Summit Lake trail and again turn south. The trail meanders up and down climbing over burned ridges and descending them in turn. The heat of the day was upon us at this point, so we stopped at the completely burned Booth Lake for a cool down. After a soak we returned to the trail and continued towards Square Lake. The trail climbs to a pass and then switchbacks down to the lake. We hiked around the lake's brushy shore and then hiked two more dusty miles west, back to where our journey began. It was two great days of getting to know Three Finger Jack a little better!
​
*All pictures in this post are taken by Dan Fent
*Disclaimer:  the trail descriptions, mileage, GPS tracks and difficulty ratings depicted on this website are never 100% accurate. Always hike at your own risk, using your own knowledge, equipment and common sense.
Franziska Weinheimer/Hike Oregon are not responsible if you or anyone in your party gets injured or lost while attempting one of these or any other hikes. ​