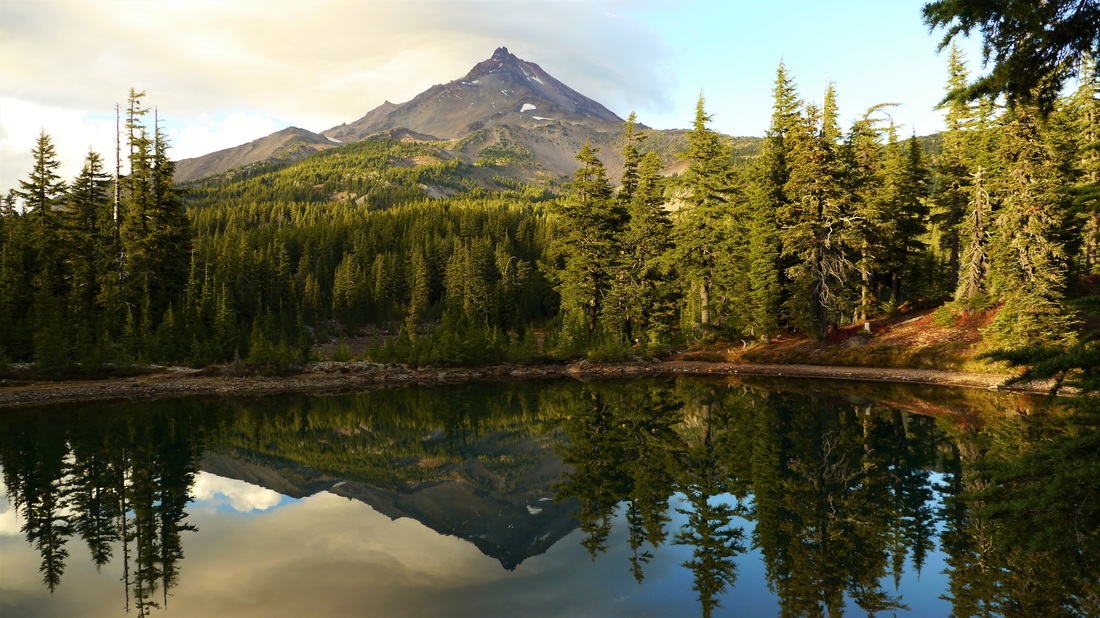 Fall is upon us, and in no place more than Oregon’s Cascade Mountain Range, which will soon be blanketed with snow. There is a sense of retreat as the fall colors dawn and the forest’s inhabitants rush to gather their final supplies for the long winter ahead. Fall, is also a great time of the year for hiking in the Oregon Cascades. The cooler temperatures are inviting, the mountains have dawned a new beauty and many have hung up their hiking boots, giving the dedicated a greater sense of solitude. I am beginning the season by hiking high into the mountains of the Mt. Jefferson Wilderness, where I plan to hike over the Cascade Crest and venture off trail to some of the wilderness’s most secluded areas. It’s an adventure I have long sought, but has always been a cursed affair. Scheduling problems and horrible weather have kept it a dream. Last year I was determined, but the Bingham Ridge and Lizard fires plagued the wilderness. This year, I wonder if I have waited too long. Fall weather in the high mountains can sometimes be unpredictable; this trip was meant for clear skies. Well??? There’s only one way to find out!!!
​

(Grizzly Peak- the peak farthest to the right)
​We begin our three day journey at the Pamelia Lake trailhead. I am backpacking with my friend Daryl and my four legged friend Kaya. Another friend of mine, Justin, plans to meet us at camp later in the night. The Pamelia Lake trail heads east following Pamelia Creek as it ascends slowly and easily to its headwaters at the lake. As we hike along there is the feeling of Indian summer, but as clouds pass over a dimmer fall feeling interrupts in intervals. Soon we reach Pamelia Lake dressed in her fall colors. Pamelia rests on an ancient bed of lava which allows the lake to slowly drain and reduce size late in the year. This year however, the lake has receded drastically due to the unusually mild winter and lack of snow in the mountains. After a quick examination we continue to a junction and turn north on the Hunt’s Creek trail. 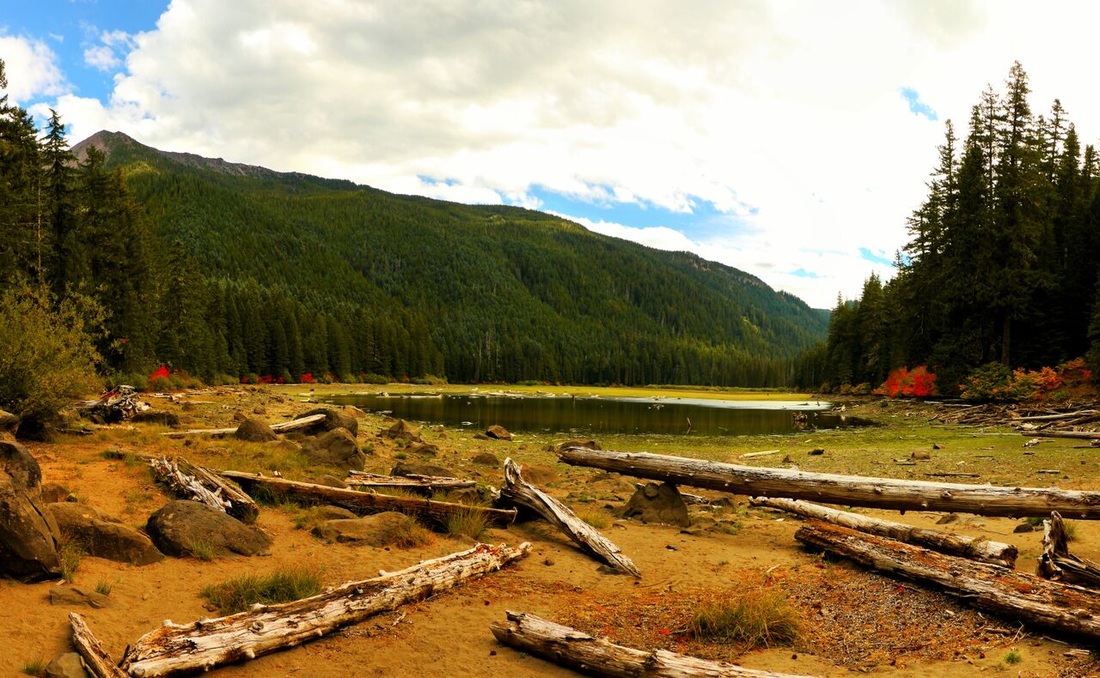 (Rain at Shale Lake)
This trail continues to climb and quickly reaches another junction with the Pacific Crest Trail (PCT), where we get our first views of Mt. Jefferson! We turn south at this junction, now the PCT continues to ascend while delivering views of Grizzly Peak to the west. As we hike along, the clouds begin to build and rain starts to fall. I become concerned about the views we are chasing, but remain hopeful that the weather will clear. 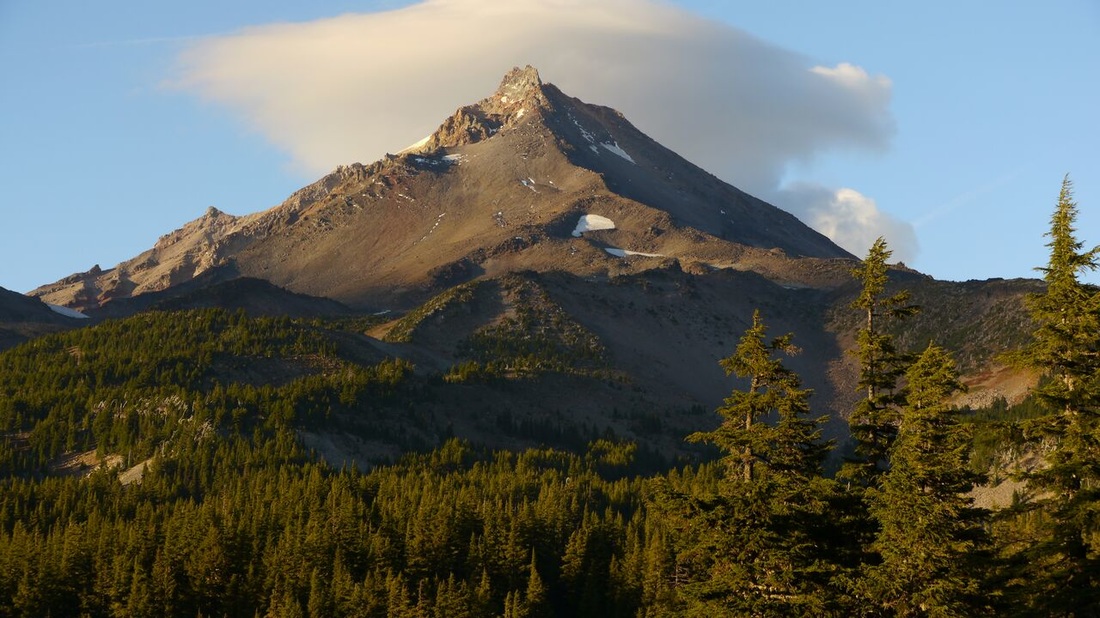 (Mt. Jefferson)
After several hours on the PCT we reach our destination for the day, Shale Lake. It’s still raining as we arrive, but almost immediately the clouds begin to part and we spend an hour gawking at Mt. Jefferson reflected perfectly in the glass of the lake! We set up camp and start a small fire as the clouds continue to clear. Later, the stars begin to peak out and our friend Justin arrives. He tells us of his failed mischief: After arriving at Shale Lake he crept his way towards our tent quietly, he then reached out to shake the tent. This would add emphasis to the horrific scream he was about to deliver and surely scare Daryl and I out of our wits. But right before the moment of execution arrived… He heard female voices from inside, because this wasn’t our tent! We have a good laugh at this near misfortune, enjoy a couple of beers under the stars, and then call it a night.
​

(Descending the Ancient trail)
I awaken the next morning to the heavy pattering of rain on the tent and lay there for a while, pondering if there really is some sort of curse on these plans. We patiently wait till past noon for the rain to stop and then decide to continue on anyway after it doesn’t. We start by hiking south, eventually making our way past Hunt’s Cove and Cathedral Rocks. Here we turn east and leave the official trail system, however, a trail does exist here… Native Americans once used this narrow, faded dirt path as part of a trading route. Today, adventurers looking for an alternative route across the Cascade Crest might stumble upon it. 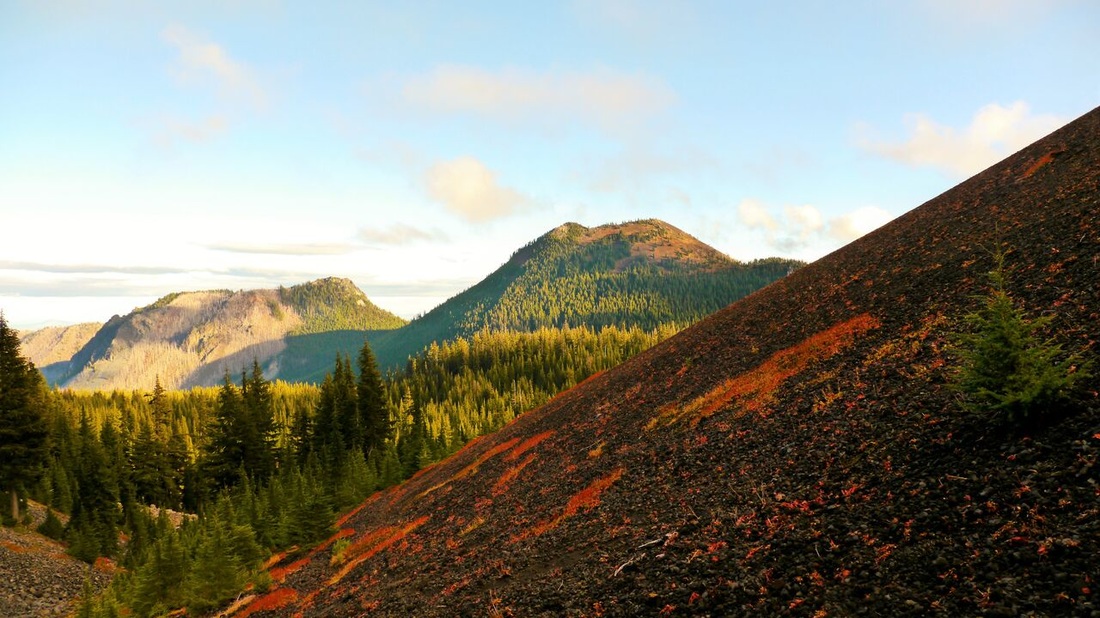 (Forked Butte)
We follow as it works its way across the crest and descends north to the base of The Table, a massive section of mountain that has been scalped flat by glaciation. It then turns back to the east and climbs over the shoulder of an unnamed cinder cone before descending to a junction with the Cabot Lake trail. Now, back on the official trail system we turn north and walk less than a quarter mile to Table Lake, a spring fed beauty that rests right below The Table’s east side. We set up camp near the lake’s tranquil waters, the evening sky slowly clears and eventually we go to bed with the stars shining brightly above.
​ 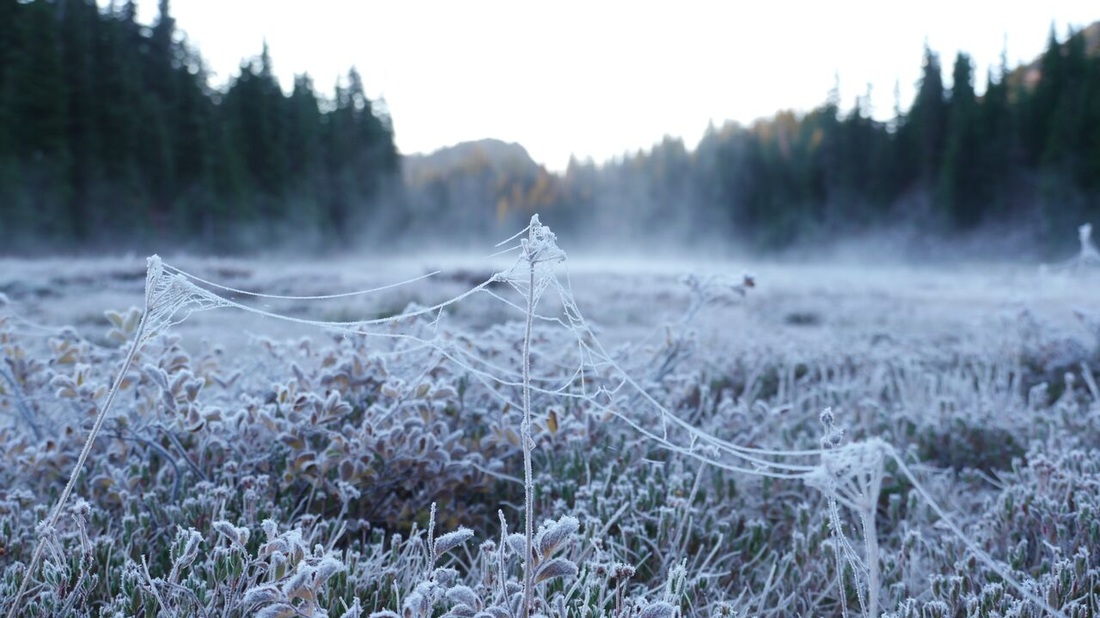 (Frost in the Table Lake Basin)
We rise early the next morning to a frost covered landscape and the clear blue skies we’d been dreaming of. The perfect weather inspires us! We decide to hike to Hole-In-The-Wall Park, which we intended the day before, until the late start.  Hole-In-The-Wall lies on the edge of the Warm Springs Indian Reservation and is essentially a small meadow notched into the cliffs of the surrounding mountains. It is a place with poor access and that is seldom visited by man. 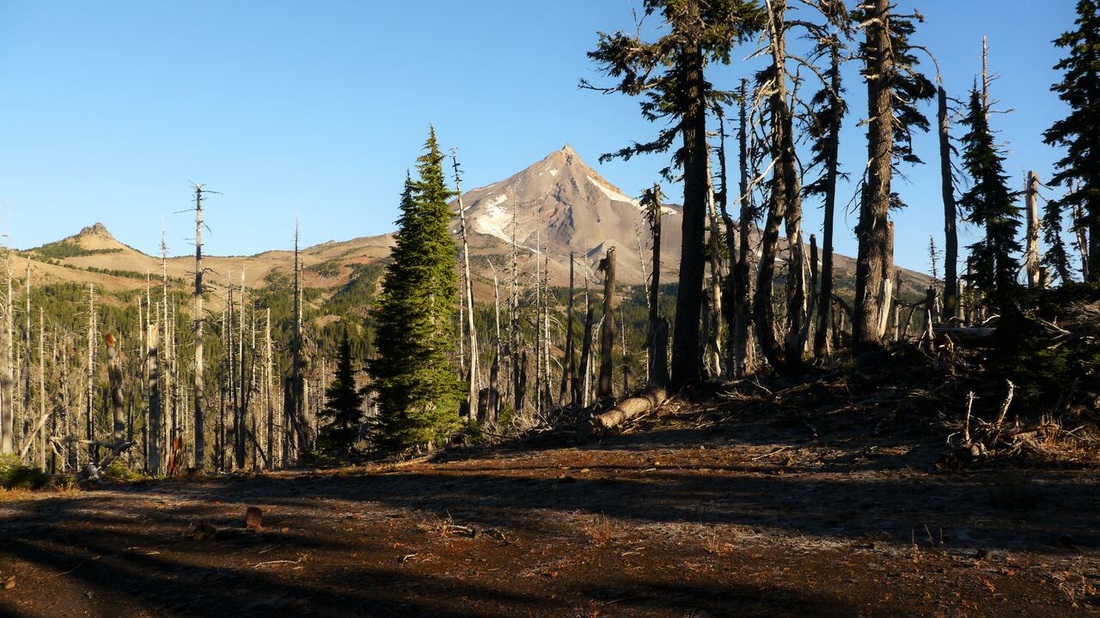 (Mt. Jefferson from the ridge)
We leave our gear at camp and continue on the Cabot Lake trail, which has been decommissioned by the Forest Service past Table Lake. The trail is sometimes faint as it works its way east, then it abruptly turns north and summits the ridge below Bear Butte’s crags. Up here the views reach as far as the Three Sisters to the south, to the north Mt. Jefferson is front and center. This is a destination on its own, but today we have our sights set on Hole-In-The-Wall, five hundred vertical feet down the same ridge we just ascended. 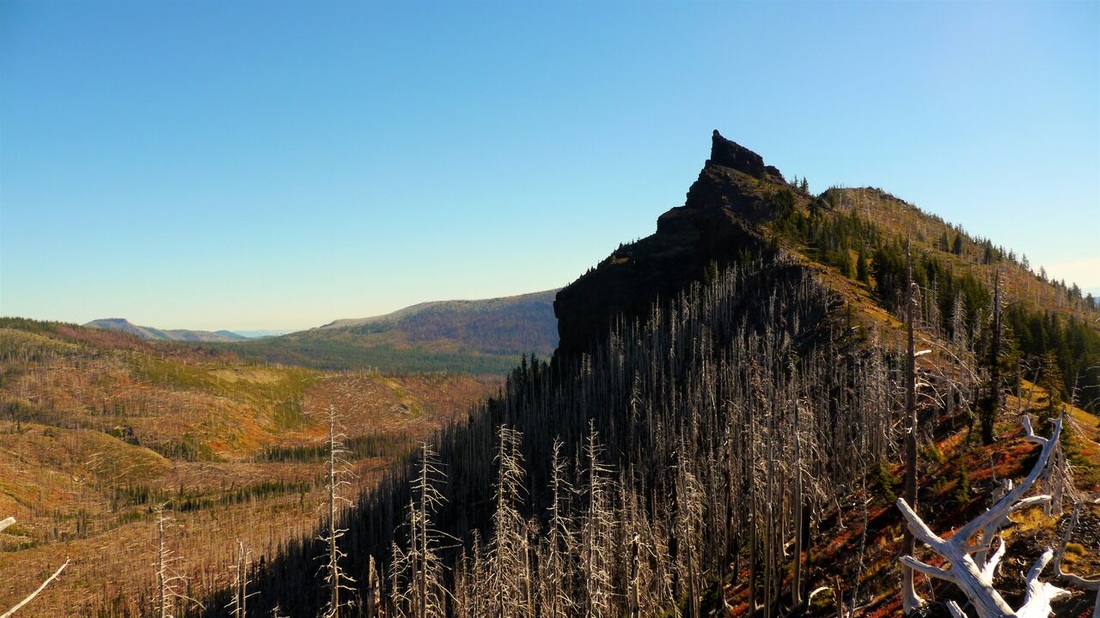 (Bear Butte)
From here on the trail has been completely decimated by the 2003 Bear Butte fire. The morning’s frost is still heavy, so we work our way down carefully, trying not to slip on the hundreds of downed, burned and bark-less trees that litter the slope. After what seems like the longest quarter mile of my life, we find ourselves in the center of Hole-In-The-Wall Park! Wind whispers through the burned snags of the surrounding cliffs while Bear Butte keeps a somber watch over us. With absolutely no signs of humanity, this is a place that truly does possess a surreal feeling… We explore only for a short time and then return the way we came, knowing we still have a long day ahead. 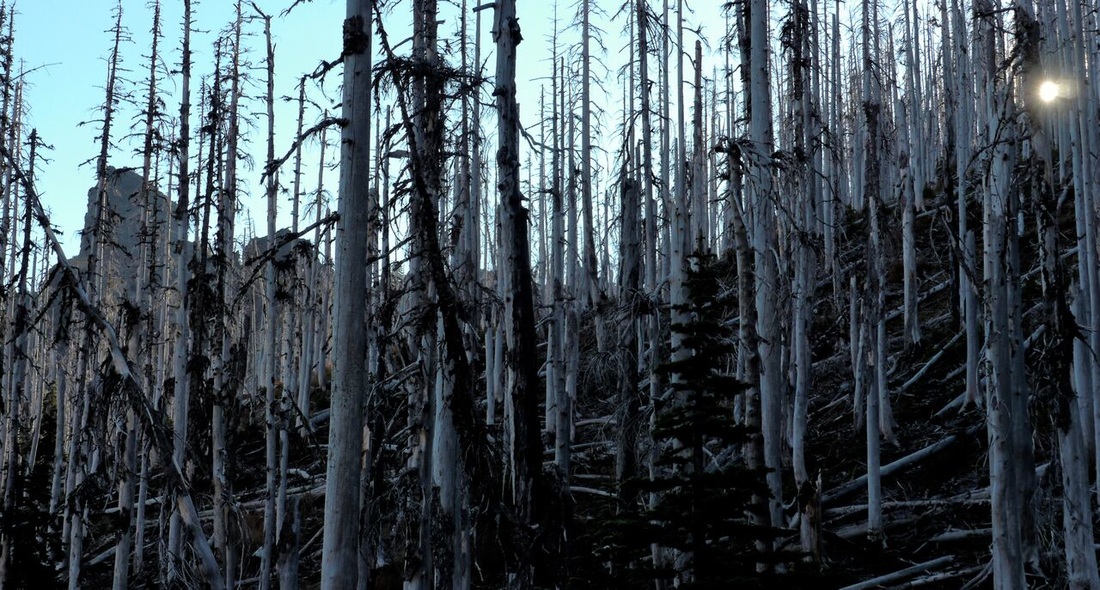 (The route to Hole-In-The-Wall)

(Hole-In-The-Wall Park)
Back at camp, we pack up and prepare for our last adventure. Instead of returning to the trail we came in on, we head straight for a gully that climbs The Table. After the short scramble we reach The Table’s flat top with views of the Table Lake basin and Mt. Jefferson. Cross country we hike on, crossing the rocky plain north to the base of Goat Peak. Here we start to traverse west and suddenly one of the most beautiful landscapes I have ever seen comes into sight. Views stretch from Cathedral Rocks all the way to Broken Top, a front row seat in the Central Cascades Theater! 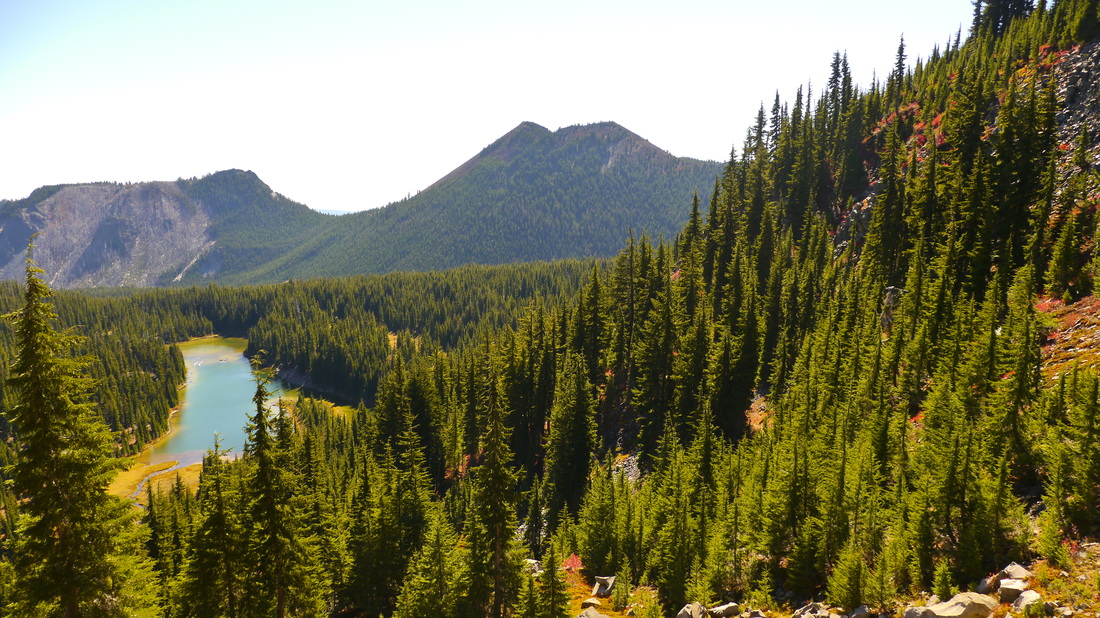 (Table Lake Basin from The Table) 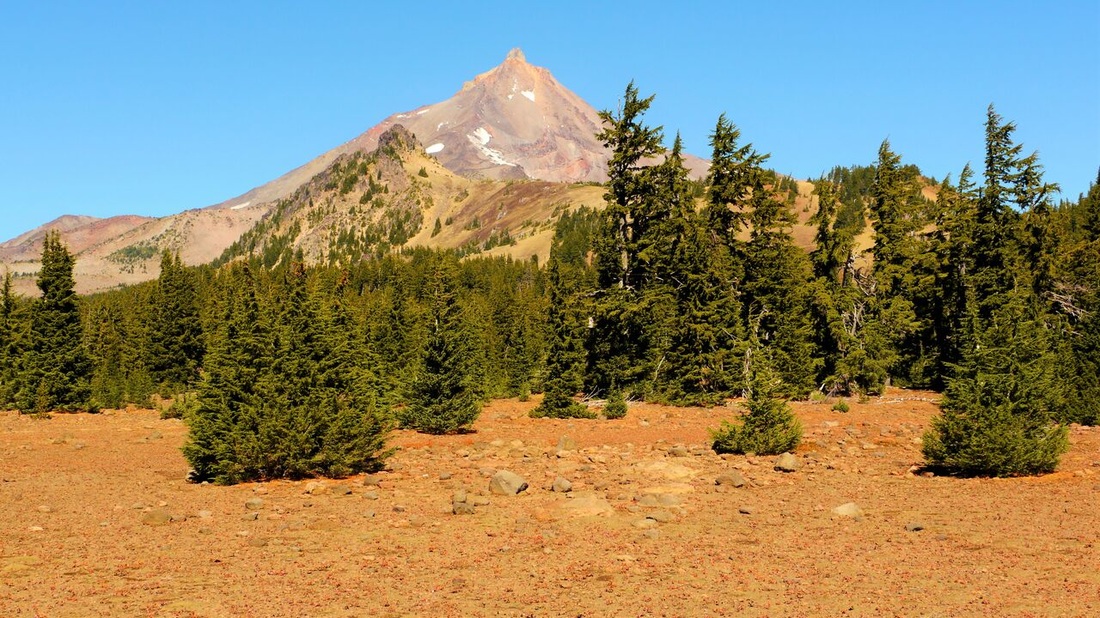 (Mt. Jefferson and Goat Peak)
After soaking it all in we pull ourselves away and continue to work west navigating through forests, meadows, and past unnamed lakes until we once again reach Shale Lake. We take a brief pause here and then begin the long eight miles back to the trailhead, repeating our route from the first day. Sore, doesn’t begin to describe my feet at this point, and I am a little sad that our adventure is coming to an end. But I smile and hike on. The wonder and mystery of the Cascades still fuel my imagination and I will be back for more! 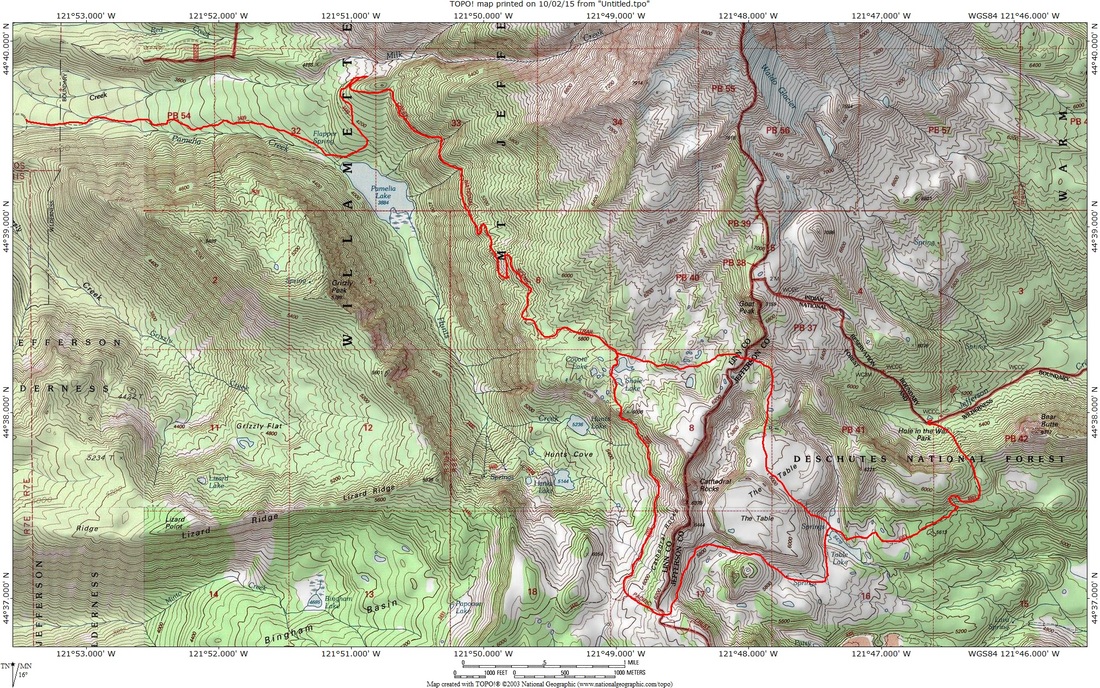 (A total of 33 miles and 4,000+ ft. elevation gain)
*All pictures and text in this post are by Daniel Fent
danielfenthiking@gmail.com
*Disclaimer:  the trail descriptions, mileage, GPS tracks and difficulty ratings depicted on this website are never 100% accurate. Always hike at your own risk, using your own knowledge, equipment and common sense.
Franziska Weinheimer/Hike Oregon are not responsible if you or anyone in your party gets injured or lost while attempting one of these or any other hikes. ​